Svitlana and her son are from the northern part of Ukraine, specifically from Zhytomyr region, Radomyshl city. They fled from Ukraine because of the ongoing war and after a long trip they ended up in Finland. Now they live in Southern Ostrobothnia of Finland, in the municipality of Evijärvi.

When the war in Ukraine started, Svitlana and her son had to leave their home. At first, they moved to the western part of Ukraine, because it wasn’t safe to live in Zhytomyr anymore. At that time, the western part of Ukraine was still more safe than the northern part. Soon the situation in the west got worse and it was more dangerous to live in there. They heard from Svitlana’s friend who lives in Kaustinen, that it would be possible for them to come to Evijärvi. Svitlana wanted to keep her 4-year-old son safe, so although the decision to flee from Ukraine was difficult, they left their country and moved to Evijärvi. Her loved ones, like her parents, husband and grandmother stayed in the northern part of Ukraine, where it is still very dangerous to live. In their words, life in there is like a lottery – you never know how tomorrow will turn out. For them, especially for Svitlana’s ill grandmother, it is hard to leave, because the road from Ukraine to Finland is long and challenging. Every day Svitlana and her family are in touch making sure that they are alright. After she has heard that her family is alright, she can concentrate on her work. She hopes that someday she could bring her family in Evijärvi too.

Svitlana’s plan was to find a job in Evijärvi and support her parents financially, because in Ukraine very few people can work. Now she is working for the municipality of Evijärvi. She is helping other Ukrainian people in Evijärvi and the job includes many different tasks and situations. She is helping many people with questions about paperwork and language, as some of the people who came to Evijärvi don’t speak English. She has for example organized new apartments for new people coming from Ukraine. Sometimes she is kind of a psychologist too. Her job is challenging, but she loves her job since through her work, she can help other Ukrainian people. The gratefulness from other people gives her motivation to keep working.

Svitlana’s son is in day care in Evijärvi. The day care is of course Finnish, and people there speak Finnish. Her son speaks Ukrainian, and at first, she was worried how things would go in day care. There was no need to worry, because they created a system in day care for her son to communicate his needs. They use cards with pictures to help him communicate. Svitlana mentions that her son is very talkative and speaks all the time in day care too, which amuses the teacher of the day care since she doesn’t understand any of what Svitlana’s son says. The language barrier doesn’t seem to bother her son, because he seems to get along in the day care very well.

Although Svitlana’s soul is in Ukraine, she is happy to be in Evijärvi. There are many reasons why she likes living in there – one of the biggest reasons being the people of Evijärvi. She mentions that people support her and other Ukrainians. People smile to them all the time, try to communicate with them and sometimes they even cry together. Another thing she loves about Evijärvi is the beautiful nature. The forests, lakes and rivers feel like home, since in Ukraine the nature is very similar. She doesn’t know yet whether she will go back to Ukraine after the war is over. She wants to give a good quality of life for her son, and in Ukraine that will be difficult or almost impossible, since everything is destroyed during the war. She hopes that the war would be over soon, as do we all.

Svitlana bakes as a hobby and it was her idea to create a buffet of traditional Ukrainian foods and pastries for people to taste in Evijärvi tuottaa -event. Lots of Ukrainian families living in Evijärvi cooked or baked something for the buffet. The delicious and free buffet was her way to say thank you to the people of Evijärvi who have been treating them well and accepting them as part of the community. 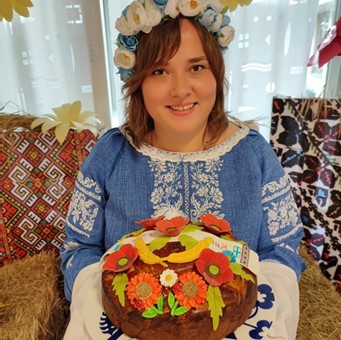